Electrical Panel for a Catalina 27 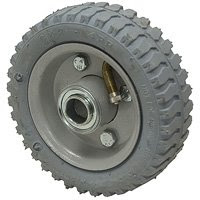 Finally, some wheels I like, and I think they have great potential. They are described here. Basically, 6 inches in diameter, pneumatic with steel hubs and 2 bearings. They'll absorb some of the shock so the robot won't be shaken to bits. Ryan thinks they look kinda like moon rover wheels! I researched sprockets and chains. It looks like #25 chains (the smallest ANSI standard) could work, but they are a bit small and might not take the loads well. They are rated at 140 lb working load. If I went up to a #35 chain, the working load goes up to 480 lbs. The reason for my concern is this robot could easily top around 100 lbs (rough estimate). If there are sudden loads when starting up or changing directions, that could really shock the chain. The #25 has a top end rating of 781 lbs, so maybe that will work. The other nice thing about the smaller chain is that sprocket selection is simplified. With smaller pitch comes more teeth in a given diameter sprocket. For these wheels, I wanted to have a sprocket that will mount to spacers on those bolts you see in the hub of the wheel. I also want the teeth of the sprocket to be well within the outer radius. The reasons for this are mostly so that the chain won't run too close to the ground. I also anticipate some flexing in the tires, so we can't assume the wheels are always going to be the same diameter during robot movements. I found a nice 42 tooth sprocket that fits well on the wheel. Using a 13 tooth sprocket on the motor, I get a 3.2:1 ratio. Using the spreadsheet I mentioned in an earlier post, that gives an estimated top speed of 25 MPH. I also figure I'll have 2 idler pulleys, one on each side of the motor sprocket, so that the chain contacts as much of the motor sprocket as possible. That will also give me a nice way to tension the chain.
Another thing I'm thinking about is a way to mount the batteries. I want something that will be very sturdy and maybe even provide some cushioning. I was thinking of aluminum angles at the corners of the batteries, but I think something that supports more of the battery surface would be better. Maybe an aluminum plate with a thin closed cell foam pad, with some fairly large holes cut out to let things "breathe". OK, that's it for now.
Posted by David Kavanagh at 3:06 PM No comments: