The Motors are Here! 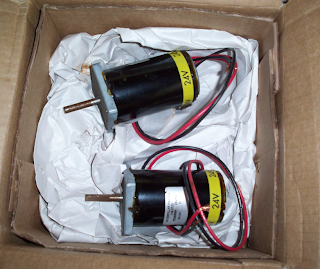 They've arrived right on schedule! I think they'll do nicely! We've been eyeing some wheels also. They have an aluminum hub and polyurethane "tire" and some nice roller bearings in the hub. I think we'll be able to attach a gear to these via some metal spacers attached to the hub.
With these wheels (at 5 inches diameter) and these motors, we can go 33 mph with a 2:1 reduction. But, Ryan thinks we should shoot for a slower top speed. So a 3:1 reduction yields 22 mph.
I did some research on motor drivers that integrate with a R/C receiver. I found this one, "Sabertooth dual 10A motor driver for R/C". It can more than handle the power needs of these motors, though I really don't know what they will draw at full load. We've also been talking about how to construct a frame. We've been talking about aluminum I-beams. Not sure where to get these yet. We'll do some more research and report what we found. Also need a source for gears and chain, but I'm sure we won't have any problem finding those!
Posted by David Kavanagh at 2:37 PM No comments:

Ryan and I have been building with LEGOs for years. Robots came naturally because seeing your creation move under its own power is way cooler than having something static. Recently, we went to see a FIRST Robotics regional competition. While there were many fully functional robots there that had interesting solutions to the task, there was also a rookie team there. Their robot merely drove around the course, but that did score points for the team! The inspiration here is that any project has to start somewhere. We've decided to make a driving base that is both sturdy and fast. Our inspiration comes from both the FIRST robots and from Battlebots.
To get started, we needed to understand some design requirements. Initially, I wanted to decide on a top speed. I drove the car at 30 MPH and asked Ryan if that was a good speed for a robot. He thought 20 might be fast enough. I suspect he is the wiser of us! Last week, I worked out some calculations that started with wheel diameter and derived motor speed given different speeds and reduction ratios. The results is this spreadsheet, which does the later, but also allows you to calculate the top speed based on wheel diameter, reduction ratio and top motor RPM.
We started with a 6 inch wheel (seems like a good size) and started shopping the surpluscenter.com web site. We found a nice motor that has a top RPM of 4500 and draws about 1.5 amps at 24 volts. I figure that two of these ought to provide enough power for a nice differential drive platform. The motors should arrive today.. yea!! parts!!
Posted by David Kavanagh at 10:43 AM No comments:

Since I'm just starting out with this blog, I think it would be a good idea to tell what its going to be about. My son, Ryan, is 8 and really likes building things. I'm trying to show him some real projects that demonstrate real world principals. We've been building robots with LEGO Mindstorms for a little while now and going over some basic circuits knowledge. The idea of building a battlebot type project gets both of us excited, so we'll be using this blog to post the project status.

Posted by David Kavanagh at 3:23 PM No comments: