How to replace Audi A5 2.0T air filters

My car is coming up on 75K miles and I decided to tackle some of the service items myself. I ordered replacement air filters for the engine and cabin of Amazon.com. One was the OEM Mann filter, the other made by TYC. I'll talk about the engine air filter first. As you can see in the pictures, the airbox has some Torx screws (6 in all), a connector and a hose. The air hose is pretty simple to remove with a large flat blade screwdriver. The thoughtful folks at Audi molded a little tab into the hose so that when you loosen and tighten the hose clamp, it doesn't try to spin away from the screwdriver! The MAF connector is pretty trivial to remove as well. Removing this connector is optional I think, but I liked being able to fully remove the top of the air box. 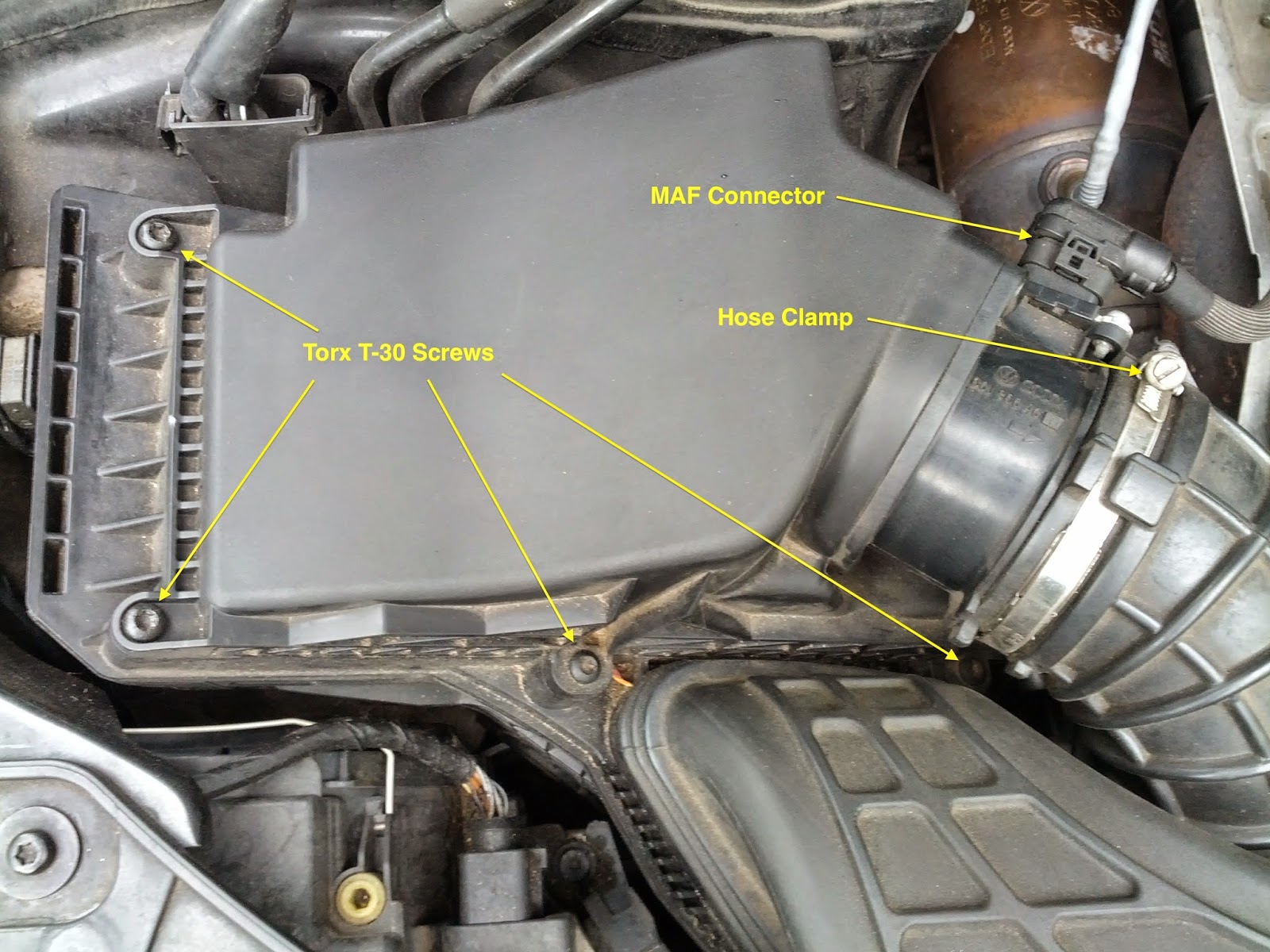 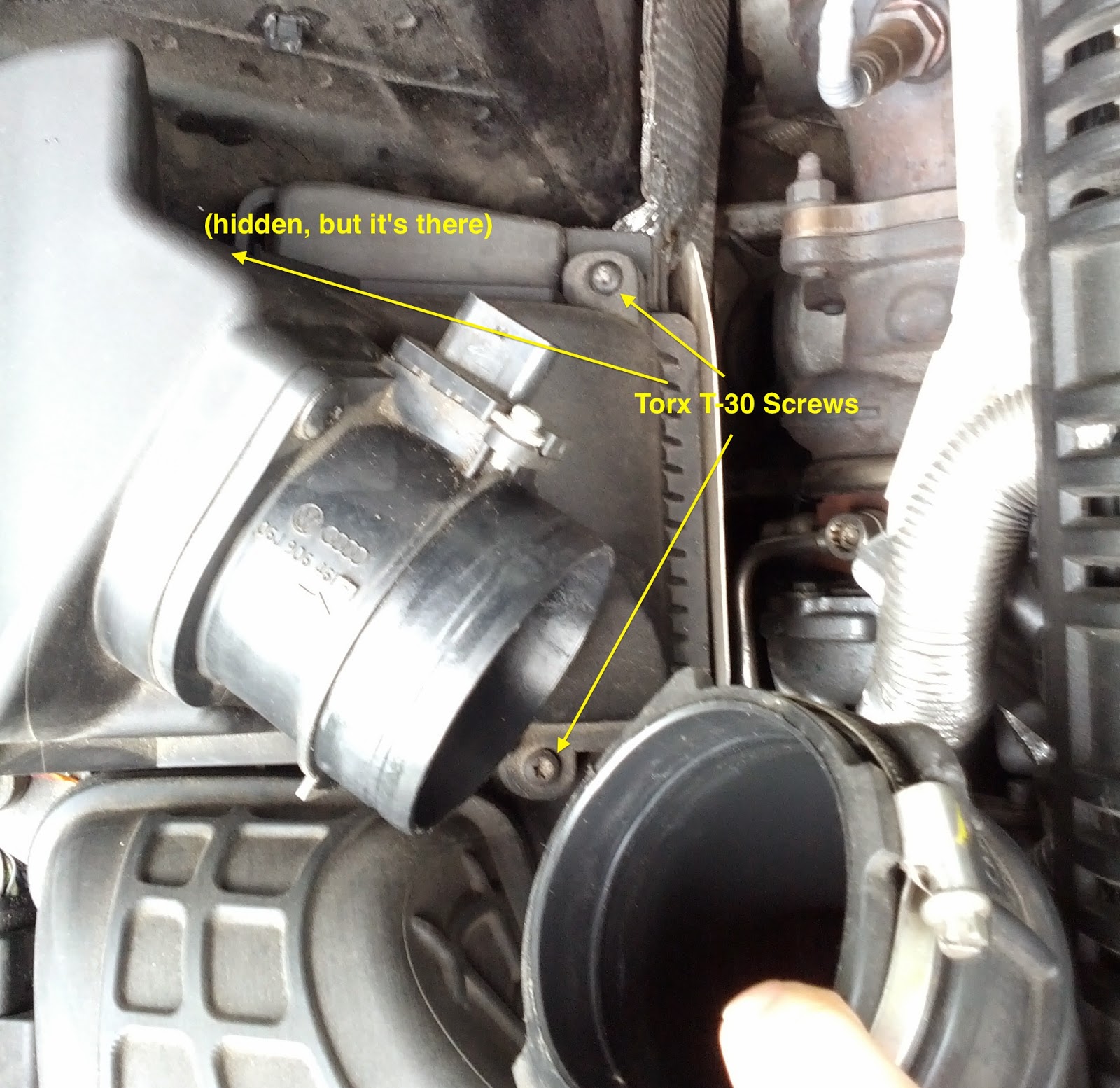 The Torx screws are captive and so once they are loose, don't try removing them. After they are all loose, you can simply lift off the cover. Below, you'll see how the filter fits. The bottom was a lot dirtier! The new filter fits the same way. Be sure that the rubber edge of the filter fits within the lip of the airbox before reassembly. As they say, it's the reverse of disassembly. 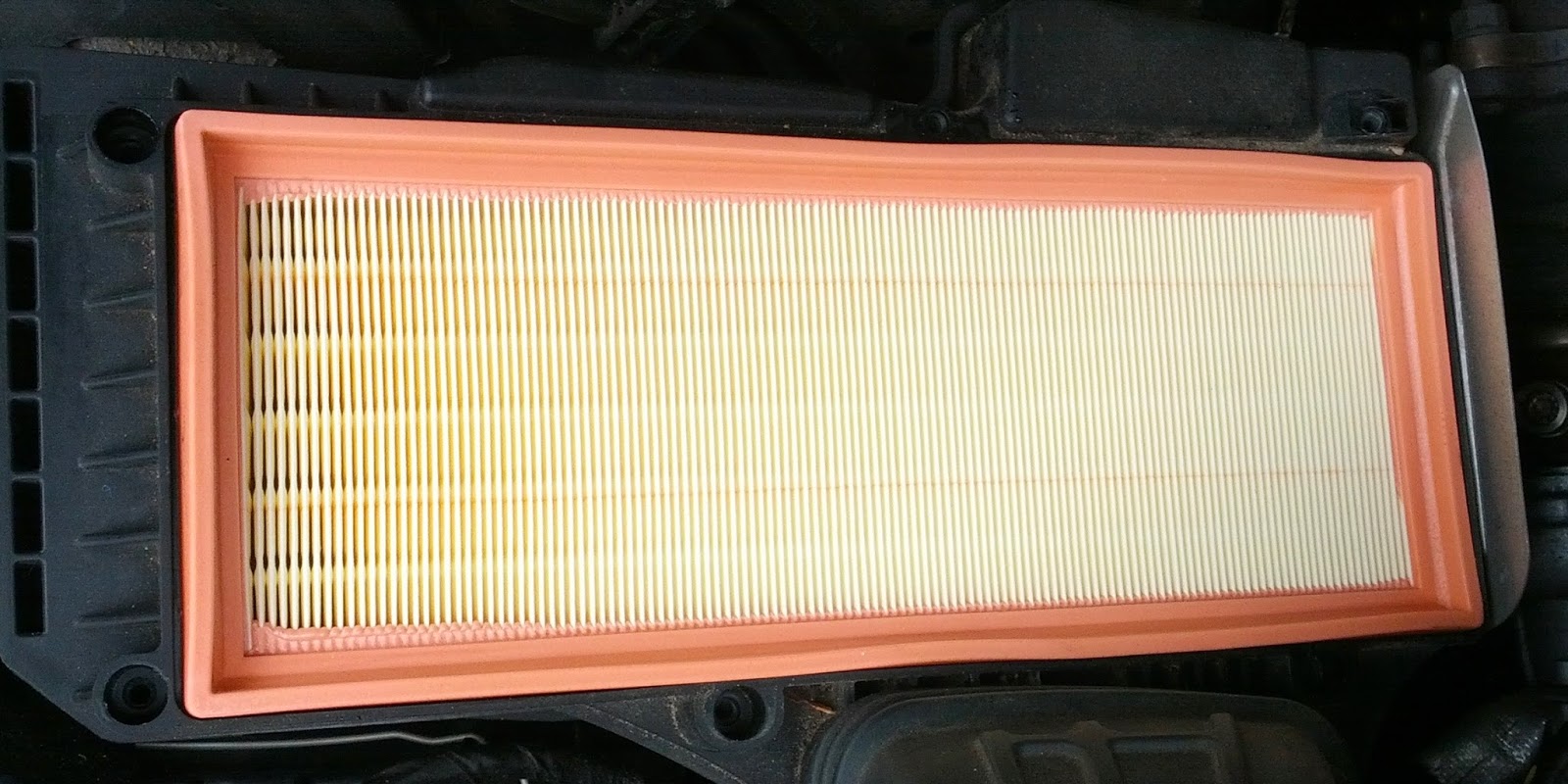 Next, I wanted to tackle the cabin air filter. On a previous car, it was accessed via the air plenum. I removed the cover on mine by removing the two fasteners shown with the arrows in the 2 pictures below. They just screw off and can be set aside. 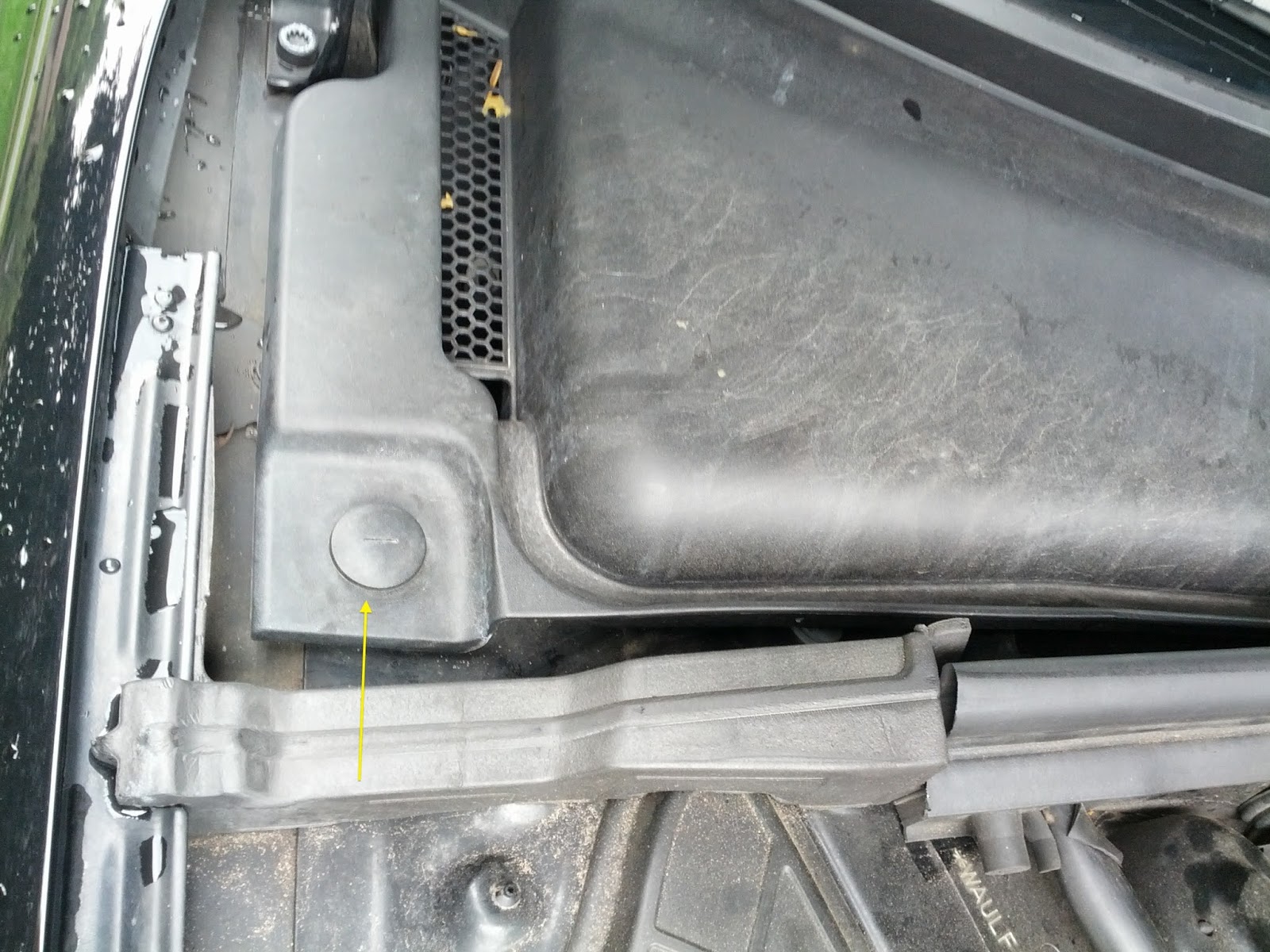 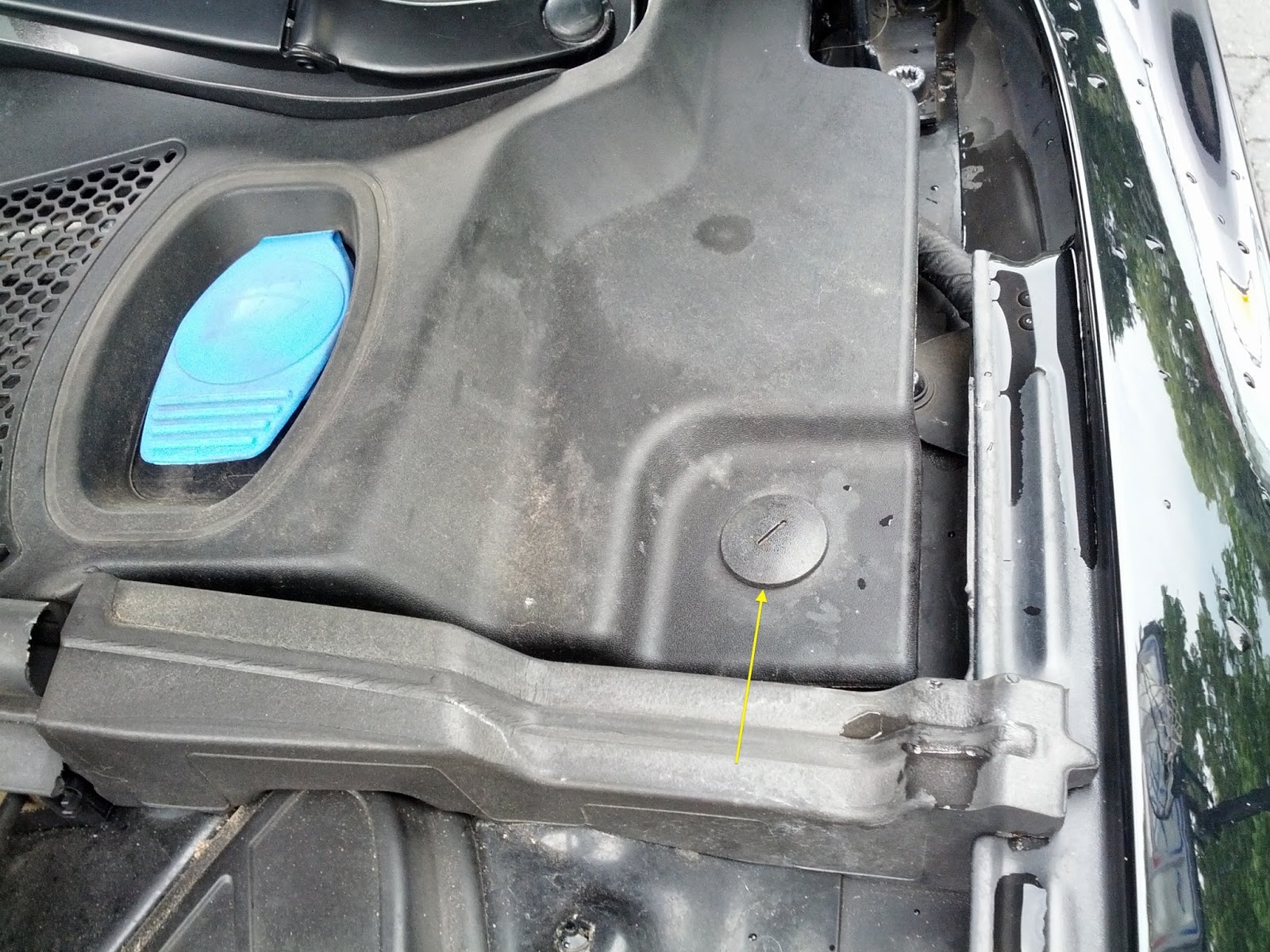 The cover lifts off starting at the front edge and pulls forward. Once I got mine off, I found the air intake. Hmm, no filter!? I noticed something else, leaves! I would never have found those without looking under the plenum cover. I recommend everyone that lives where leaves fall from the trees (isn't that most places?) should clean out the air plenum yearly! The leaves will rot and also trap moisture which is a bad thing for the painted metal! 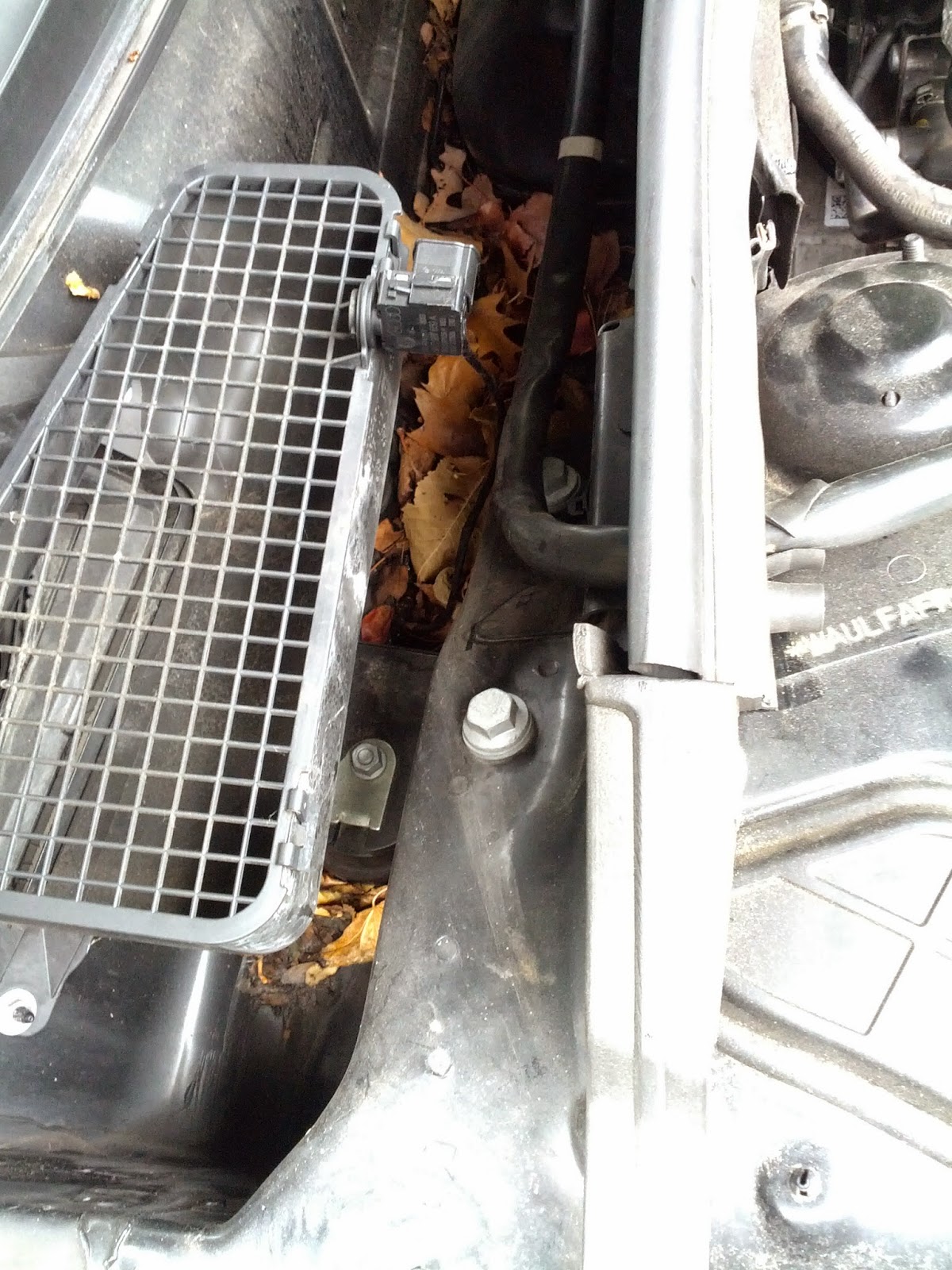 After vacuuming that out and replacing the cover, I decided the cabin air filter must be inside the car. The filter I bought came with instructions on how to replace it, so that helped! The filter is accessed by removing a foam panel behind the glovebox. You'll need to get down into the passenger footwell to get at this. Notice the 3 screws that can be easily removed with your fingers. Once those are off, carefully pry the front edge of the foam panel down. You might be able to push the whole panel back a little to clear the plastic on the front edge. Try not to rip it since I think that could happen pretty easily. 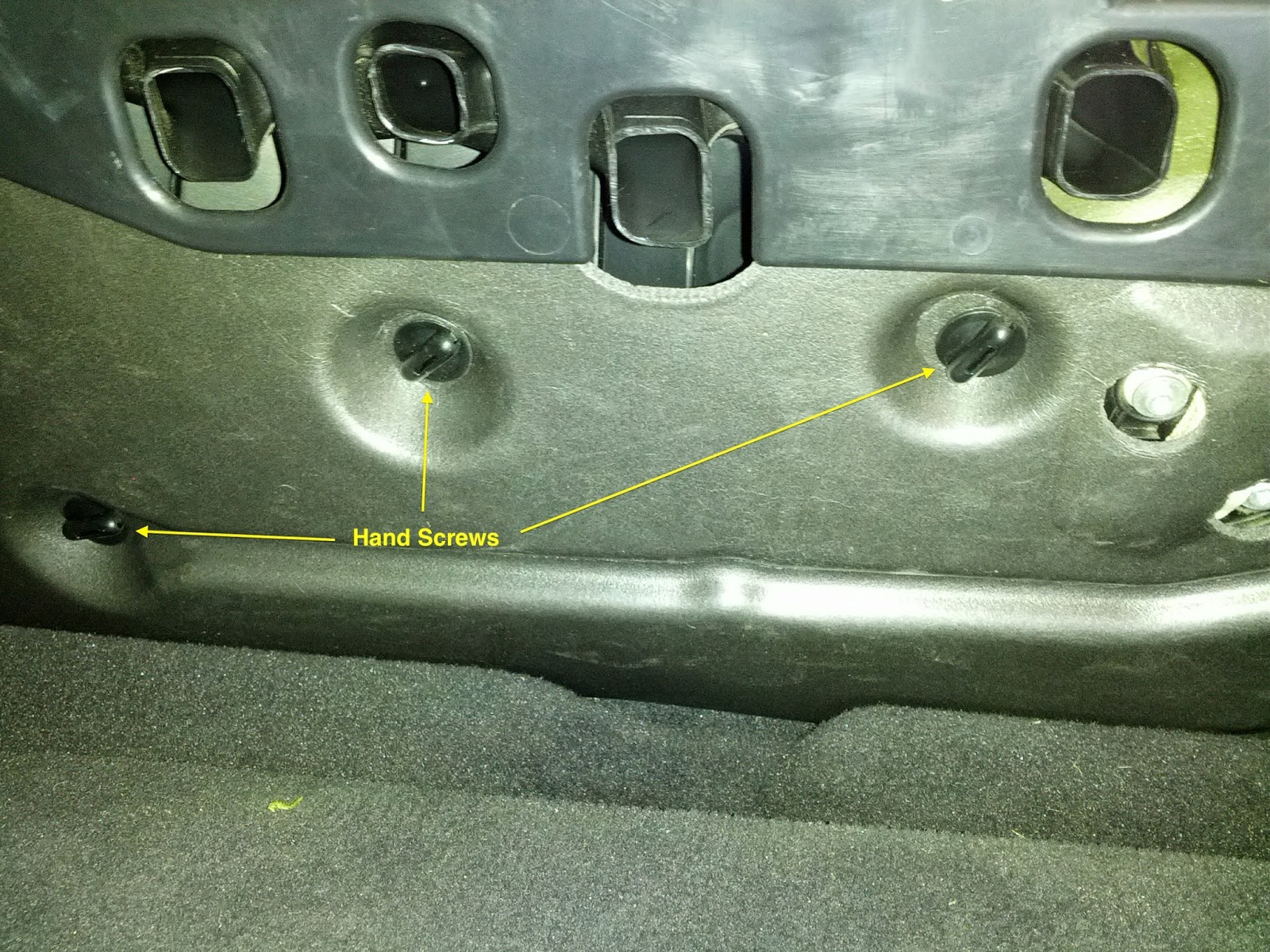 With that panel off, you can see where the filter is held. The plastic retainer is removed by pushing the little handle to the right an inch or less. Then, it can be pulled off and out of the way. The old filter has to be pulled down and out. I had to bend my filter a little to clear the carpet. 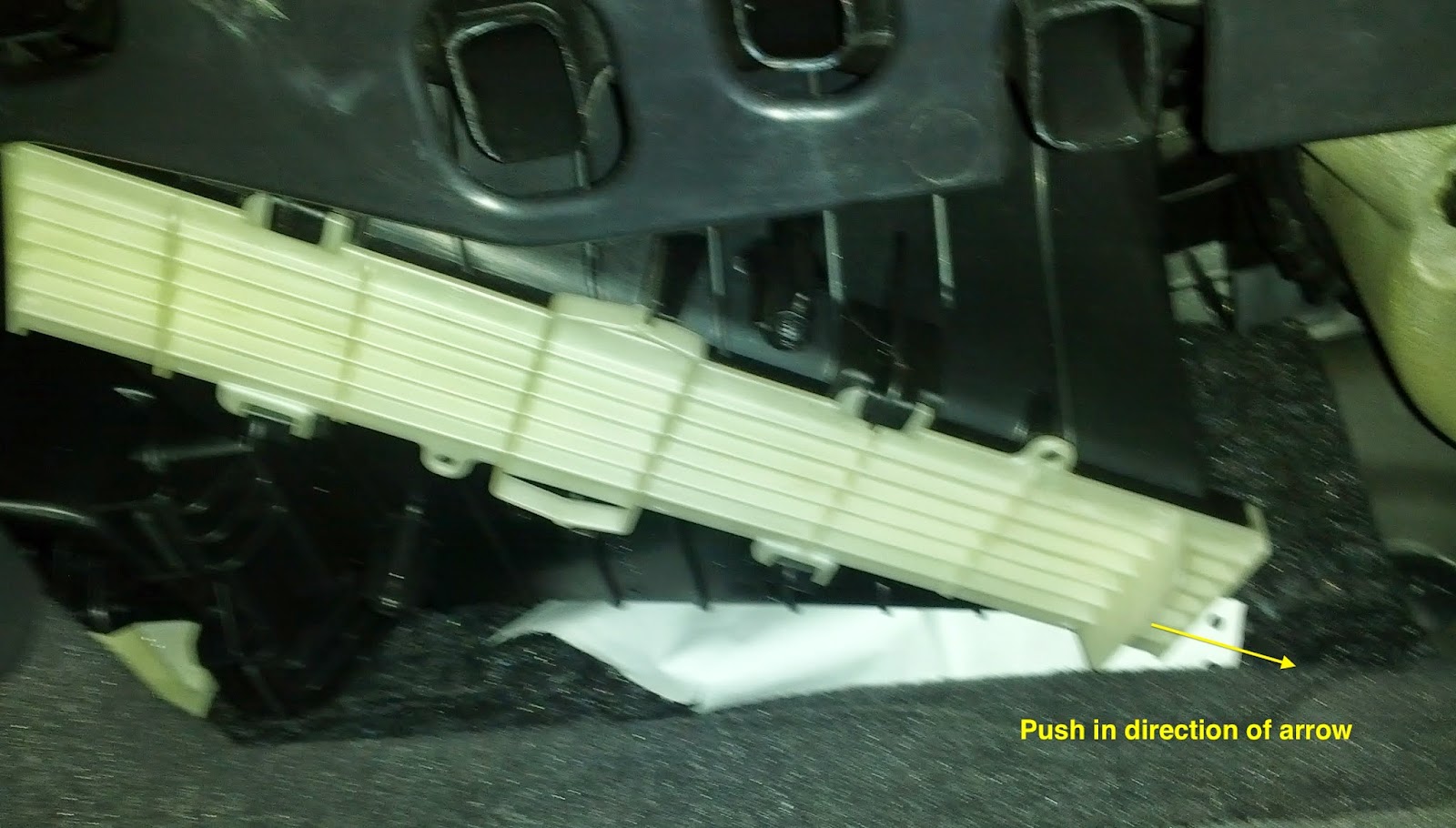 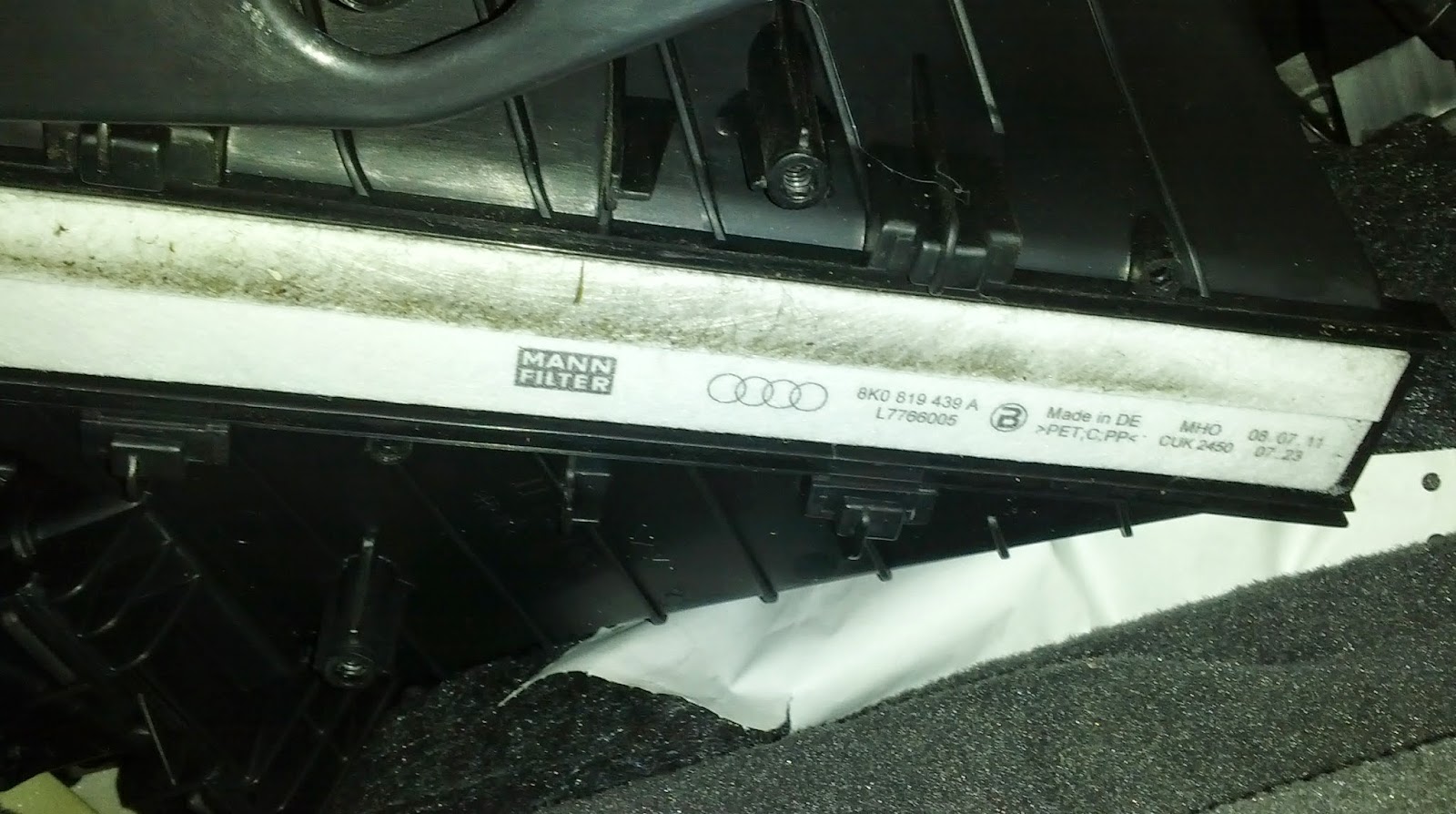 Here is my new filter above the old one. Definitely a lot cleaner! Also, see the little tab on the new filter (shown by the arrow). This isn't a big deal and probably helps pull it out later, but it gets in the way of the retainer, so I folded it flat against the filter first. 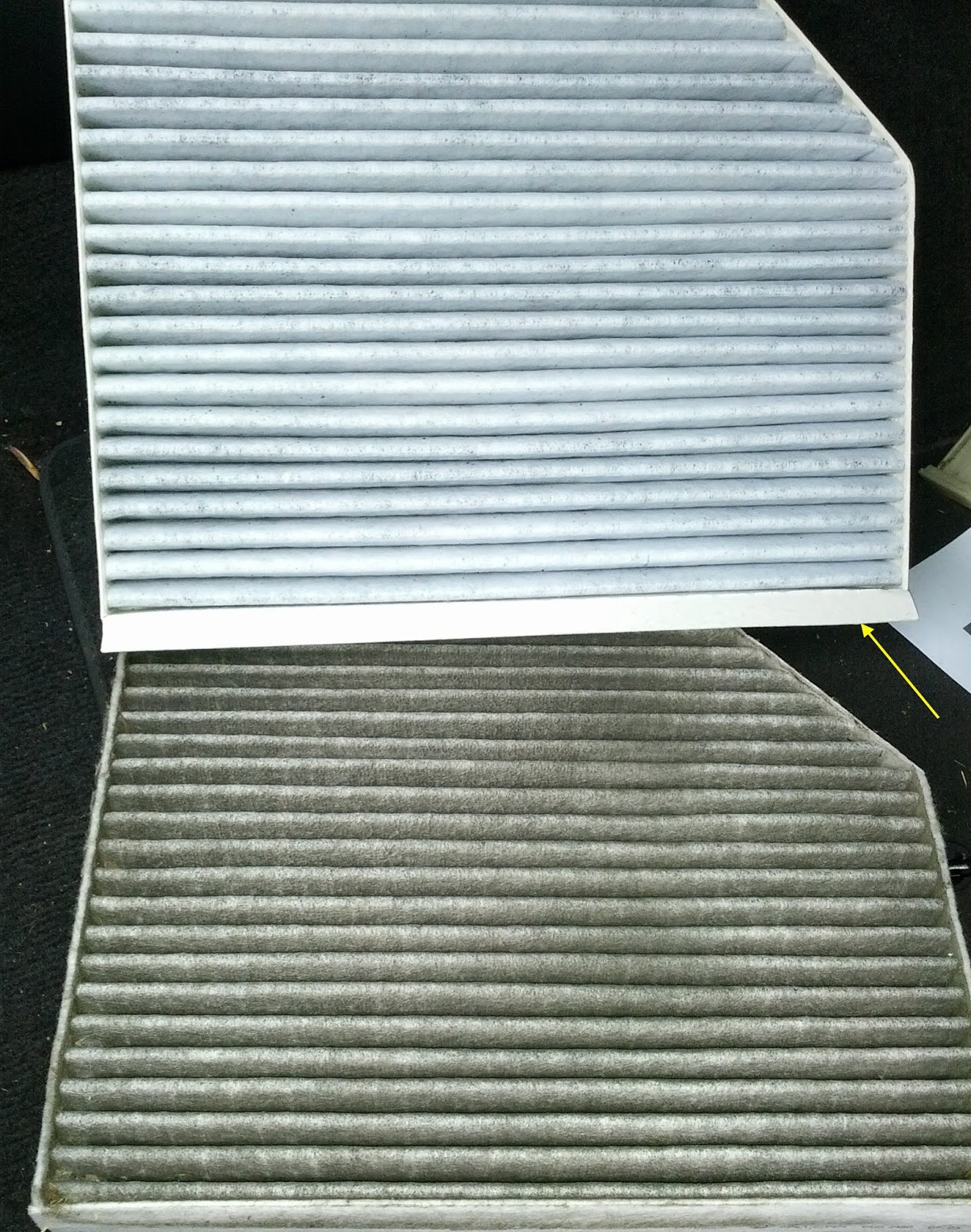 I hope this helps! The other major item on my 75K service is spark plugs and I won't write that up since I found a very good how-to already posted.
Posted by David Kavanagh at 8:40 PM 5 comments: